DVD REVIEW: What Happened To Kerouac? 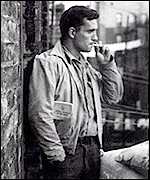 This 1985 documentary, co-directed by Richard Lerner and Lewis MacAdams, is a wide-ranging tribute to the life and literature of Jack Kerouac, the tragic chronicler of the Beat Generation and author of the seminal novel On The Road.
The Beat Generation was a group of writers and artists in post-WWII America who provocatively explored their disaffection with an increasingly homogenous and materialistic culture through often-autobiographical work. Kerouac (who died in 1969, aged 47) was widely perceived as the leader of the Beats, although as this documentary shows, he was ill equipped to handle the fame and infamy that the role demanded of him.

From its opening scenes it is clear that What Happened To Kerouac? seeks to further enshrine Kerouac in the pantheon of literary saints rather than critically examine his reputation or the merits of his work. That in itself is no great sin.

Less forgivable is the film’s inaccessibility: viewers who are not already intimately familiar with Kerouac and his oeuvre may find it dense and confusing. The filmmakers’ desire to avoid a classic, chronological tracing of the trajectory of Kerouac’s life results in an occasionally-confusing parade of talking heads. Too, the directors display a reticence to delve beneath the accepted surface of the Kerouac myth: allusions by Kerouac’s contemporaries about his ambiguous and conflicted sexuality, for example, are left frustratingly unexplored.

These criticisms aside, What Happened To Kerouac? is a richly rewarding documentary for anyone wishing to learn more about the author of such works as The Subterraneans, Desolation Angels and Mexico City Blues. Filmed when many of Kerouac’s contemporaries were still alive, the film features revealing interviews with the likes of poet Allen Ginsberg, transgressive author William S. Burroughs, and many of the women in Kerouac’s life; from Beat author Dianne Di Prima, through to Kerouac’s one-time lover Carolyn Cassady and his daughter Jan. Magnificent archival footage reveals the destruction that fame wrought on a man who was psychologically capable of dealing with the public’s demands, and a sensitive jazz soundtrack adds poignancy to some of the starker footage.

While the documentary’s flaws are compounded by a lack of extras (not even a commentary or a trailer are provided) the DVD transfer is sharp; and the subject matter itself – the complex life of Jack Kerouac – more than makes up for the film’s shortcomings. Without doubt, What Happened To Kerouac? is one DVD that any fan of the Beat Generation simply must have.

(Availaible in Australia through Force Entertainment)
Posted by richardwatts at 2:49 am